Small Fry in the big Apple

Oh Hey! Just back from our quick trip to New York. Jude's first time on the East Coast! Matt and I have really been looking forward to introducing Jude to the city and point out all the familiar spots he knows from his books and favorite shows.

We had a great time! Oh man, did we pack in as much fun as we could. Poor little dude went a whole week without a decent nap, but thankfully he is a great traveler and was happy most of the trip.

It didn't start out as our greatest adventure once we arrived in Houston. We sat on one plane for nearly an hour before they sent us to a second plane, only to find out there wasn't enough fuel, then to a third plane that didn't exist, and finally to an amazing Marriott bed for fours hours of sleep and $600 in travel vouchers. Over all, an exhausting win.

After an unplanned second layover in Atlanta, we lost our first day there. However we did get to dine with friends and family for some of the best Chinese food ever! We have great food in PV, but no decent Chinese spots, so this was a real treat. Jude and his cousin Danelo spent the entire meal demanding oranges instead of oh, the lobster and veritable feast! Kids.. Don't know what they're missing.

We visited the American Museum of Natural History because I was dying to show Jude the dinosaurs! And a few days later we caught some with 'flesh' at the Bronx zoo. It's safe to say Jude is now officially obsessed with dinosaurs!

Other highlights included the food! So many amazing dishes at Schmorgesburg in Williamsburg, pizza, Haitian food with cousins, Moroccan food with Uncles, pizza, bagels, Sandwiches.. If only we had more pizza!

The best take away though was the family and friends we got to hug and laugh with, if only for a short time. Jude spent countless hours playing playing and bonding with Danelo and his other distant cousins while we snuggled newbie, Mason as much as we could. While we miss everyone so much it is a blessing to have people all over the world that we get to travel to.

It was really nice being able to spend the entire week in NYC and with 4 dogs at our AirBNB, Jude was in heaven. We also got the opportunity to spend time on Roosevelt Island, which we had never seen before.

Only a few more months until our next planned trip and a new one to plan for with our travel vouchers! NOLA we'll be seeing you.. 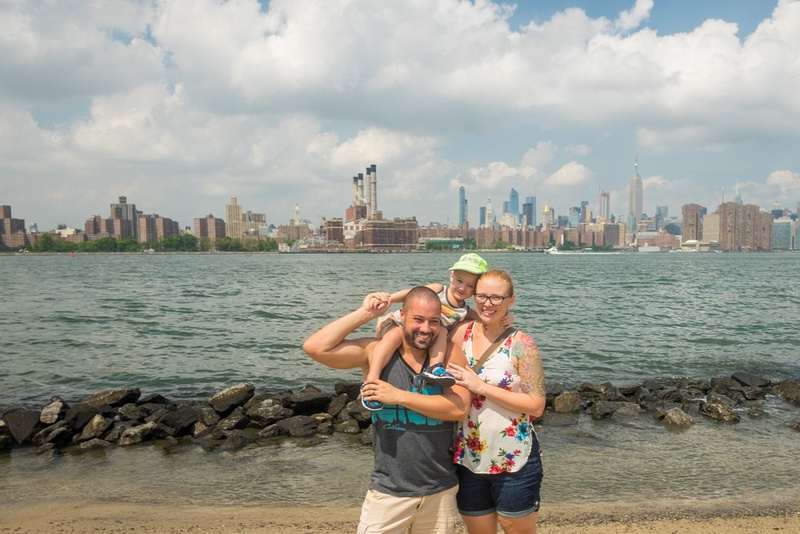