Week in the Life of the Werters; February

So I've decided to make it a mission of mine to make more quality portraits of Jude and our home life this year. I came up with the idea of picking a few random weeks throughout the year and documenting as much of it as I can. I had anticipated many things for this particular week, but a barrage of toddler misfortunes gave us quite the twist. Jude has been suffering through pushing out his molars and has been in a lot of pain with many a sleepless night battling high fevers. 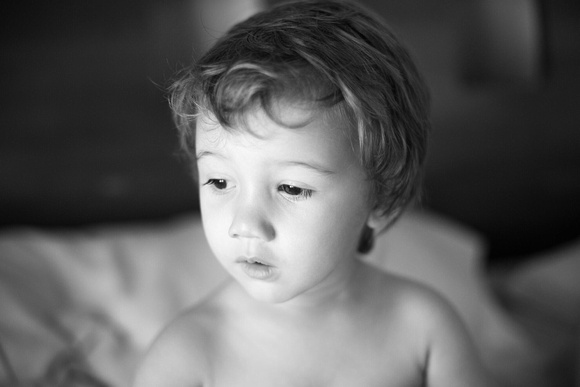 Sunday was a sleepy Superbowl morning after a mostly sleepless night. To top it off, we woke up to no power in our house or anywhere along our street. Just our street. Just our luck! A large Wal-Mart truck had turned onto our narrow street around midnight and taken out an electrical pole. We weren't disappointed to not watch American Football, but Jude was not thrilled to miss out on Paw Patrol. He and I spent the morning building pillow forts, block towers and reading books while dad did laundry and cleaned the house; yeah, I'm a lucky lady! I managed to get quite a few smiles out of Jude and ended up with some of my favorite portraits of him to date. Later, still not being able to open the refrigerator, we ventured into the neighborhood for some birria de chiva.. mmm! Jude played in the playground structure in the mall, we waited out the lack of power with some neighborhood friends and eventually had to go to Dominos for dinner as it was pitch black in our house. Thankfully it's way better pizza than it is in the states and we came home to power, just in time to get Jude off to bed.

Monday was a Holiday recognizing Constitution Day so Jude didn't have school and he was starting to have some stomach aches and a whole lotta crap you non-parents won't want to hear about..

Tuesday we got out and about early as we had work to do! We headed off to Rosita Beach in Centro where we had a photoshoot with some new friends celebrating their 5 year wedding anniversary. We decided to make a beach day out of it so their son Cayden, who just turned one, would have the chance to play with Jude. Both boys were teething, tired and very cranky! We persevered and got some wonderful pictures of everyone. Jude had the best time trying to catch a flock of pelicans on the beach even though any one of them could have gobbled him right up and flown away. The weather was beautiful and Matt got his first sunburn in Mexico. We gingers and our sunscreen left the beach sun-kissed and unscathed.

Wednesday, more crap; no school for Jude once again. His little tummy was not happy and we spent the majority of the day snuggling whilst trying to juggle the laptop to get some work done. Thursday was virtually the same, except halfway through the day we realized Jude totally could have gone to school and he was finally over his bug. We had a lot of regrets on Thursday. :D A few weeks ago I introduced Jude to shadow puppets using the flash from my phone to cast them on our bedroom wall. He was afraid of them at first but has now taken to stealing my phone, holding it up to his face and making giant shadow Judes. This was how we ended Thursday.

Finally Friday, Jude is back to school. We were thrilled to be back at our normal routine, walking Jude to school, riding on dad's shoulders the whole way and stopping at Javier, our beloved Birote man! I had to stop at the immigration office and took the bus; on the way home we were serenaded by a mariachi.

Saturday was a morning of un-photogenic tantrums and our shopping day. Jude joined Matt to the meat store while I went produce and seafood shopping. All in all it was a rough week but I think someday we'll appreciate having photos of the bad days too. Jude is growing up so fast, and not all of it is easy, but all of it is so precious!