Our Week in the Big Easy

Our first big adventure in 2020 was our trip to New Orleans; a city we’ve always wanted to visit and it certainly did not disappoint! We got our fill of amazing music, fried food, southern hospitality, and beautiful architecture. New Orleans is one of the most interesting and unique parts of the US I have ever been to. With its history as a French colony, it has a very different feel that certainly sets it apart from the rest.

Where else would we start our adventure if not Bourbon Street. Because it was still the morning, it was fairly tame from the Bourbon Street that you typically see on tv and in movies. However, the lack of people did not remove the fact that this was clearly a street dedicated to a never-ending party. As we walked along, the street was lined with bars, restaurants, cigar shops, and gift shops.Throughout our trip we saw many versions of Bourbon Street, crowded and peppered with the orange and purple jerseys for the National Championship game, echoing with musicians and kids drumming on buckets on every corner. We spent our last night walking Bourbon for the full effect of absolute madness, and we saw it from above; lunching on a restaurant balcony while Jude had the time of his life throwing beads at passersby. Aside from the poor, unsuspecting woman who took some beads to the face at his hand, it was pretty cool to see him enjoying something that so many people have on their bucket list. 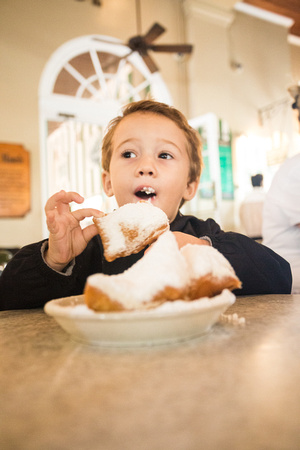 A popular dish in New Orleans are beignet is deep fried bread covered in mountains of confectioner’s sugar, basically a French donut. While we had them many times, it was a point to enjoy them for our first meal in the city and we started with Cafe Beignet located in Music Legends Park, a small alcove with statues of famous musicians. Though the consensus was that overall the best ones were for our last breakfast at Cafe Du Monde’s historical coffee stand that has been open since 1862. In our memories, Jude spent the majority of this trip covered in powdered sugar and smiling from ear to ear. After many attempts to pick it up and eat it, Jude adopted the tactic of eating them face first.

As expected we thoroughly enjoyed exploring the French Quarter; there were many sites there were to see, including the amazing St. Louis Church situated right outside of Jackson Park, Washington Artillery Park which provides a fantastic view of Jackson Park and St. Louis Church behind it, and the steamboats along the waterfront. It took a lot of self control to stop Ash from photographing every building and balcony.

We also explored Louis Armstrong Park, which is a cool, network of paths and bridges over a pond with several fountains in front of the main building. It was another peaceful location with people on dates, reading, and strolling along with no cares. It is also worth seeing at night when the entrance to the park is lit up.

Many times we found ourselves at B.B. King’s Blues Club at the edge of the French Quarter right near the French Market. We loved this place as a spot to rest, have some inexpensive drinks, eat delicious food, and listen to fantastic live blues. There, we had the opportunity to listen to the Kevin Gullage Band. Kevin Gullage had such an amazing voice, especially considering he was only 21 years old. It was truly a pleasure to listen to him work the crowd and place his amazing talents on display. We also had the opportunity to speak with him and he was a very humble and down-to-earth man.

We made a point to check out the House of Blues, which had a really cool vibe to it. It was located down a narrow alley that had some cool murals on it and ended at a little “Voodoo Garden”. On the inside, there were glass cases with the heads of blues legends in them with red and purple lights all over. Unfortunately, there were no bands playing that the time because the NFL playoffs were playing; however, it was a great spot nonetheless!

Whenever possible we took the opportunity to ride one of the beautiful streetcars that NOLA is known for. We took it up to an area that had tons of cemeteries with their unique crypts that are a staple of New Orleans. We also explored the massive and peaceful City Park, including its fantastic sculpture garden. Also located within City Park, we explored the New Orleans Museum of Art, which was 3 floors of incredible artwork from various periods and regions. We could have easily spent hours exploring its many rooms, artifacts, paintings, and other attractions, but Jude is not quite so invigorated by such things. We are fortunate with our abundance of street art in Mexico, we were more than pleased to see so much soulful and music inspired murals and statues, and bright colored buildings every where we went.

While in the city we didn’t have the best weather and one of the days we were struck by an intense storm, so we visited the Audobon Butterfly Garden and Insectarium, which was tons of fun and provided Jude some of the most excitement of any spot we visited. There was tons of information and cool creepy crawlies to look at. We forced Jude to eat some Cricket King Cake, a classic New Orleans Mardi Gras cake, made with crickets. He picked them off the top but didn’t seem to mind the cricket flour it was baked with. Jude loved the butterfly garden so much and desperately wanted a butterfly to land on him. He was pretty offended that none of them liked him enough to do so and we headed towards the gift shop with a crying toddler.

No blog of NOLA can be complete without a mention of all the fantastic food to be found there (they have so much more than just beignets). We ate, and ate, and ate some more. The catfish and shrimp po boys, crawfish étouffée, gumbo, jambalaya with chicken and andouille sausage - all of it is amazing. We even got Jude to try alligator, which he was a big fan of and I got the chance to have a crawfish, crab, and shrimp omelette. Ash on the other hand struggled as a new non- meat eater and her only option was to take in her vegetables through all the delicious Bloody Marys.

All and all, NOLA did not disappoint at all. It was too much fun and we really enjoyed exploring, eating, and speaking to the many friendly people of the city. At some point, we will definitely have to take the opportunity to visit again.